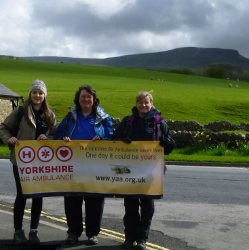 We decided to raise money for the Yorkshire Air Ambulance charity and wanted a challenge that we would enjoy, so decided to do the well known Yorkshire Three Peaks; Pen-y-Ghent, Ingleborough and Whernside. It was never our intention to complete all this in one day, so we decided to do one peak a day.

Although the weather forecast kept changing we set off in bright sunshine from Horton-in-Ribblesdale, where we met up with Air Ambulance volunteer Martin, who wanted to complete day one with us.

We reached the summit in just over an hour and a quarter with high winds battering us into the hill, luckily not over the edge! Grateful for the shelter by the trig point, we stopped for a well deserved lunch.

Day 1 was going to be cut rather short in comparison to the remaining peaks, however we extended our walk down the spine of Pen-y-Ghent and over Plover Hill which was, unfortunately, very boggy. Mollie very nearly lost her shoe and Debbie actually did! Ending up with a very soggy sock, although Martin managed to save the shoe. A quick change into a spare sock and we were on our way again. Liz’s water bottle falling from her bag and head first into the mud was another of the day’s calamities.

We then began the steep descent from the top of Plover Hill onto Foxup Moor, which was very challenging with the wind raging all about us. It was only after we’d reached the bottom that Martin confessed to a fear of heights.

It started to rain on the homeward stretch and, to our dismay, the local Pen-y-Ghent Cafe was closed! So we had to settle for a cup of tea and a packet of crisps at the local pub. After a hot bath, a good meal and a few glasses of wine we had a good night’s sleep, ready to take on Ingleborough.

A glorious start to the day! A complete change from day 1. The sun was shining, with just a gentle breeze in place of what we experienced the previous day and we set off in good spirit after a Full English breakfast. The views back up over Pen-y-Ghent were spectacular and the limestone pavement around the base of Ingleborough seemed to be shining in the morning sunlight.

After a very brief moment of 3G emails were checked and phone calls were made, so back to business as usual. A brief tea break, during which Mollie launched her cup of tea over Liz in an attempt to escape a wasp attack, almost running right up to the summit in her panic, and we made the final push to the top of Ingleborough for a late lunch with magnificent views over Morecambe Bay on one side, Whernside and Ribblehead viaduct on the other.

Not wanting to retrace our steps we then began a treacherous descent over Ingleborough’s edge down into Chapel-Le-Dale. Being much steeper than we anticipated we took our time cautiously clambering down.

We made it back to the car in good time to seek our accommodation at the Station Inn, Ribblehead, starting out in the bar with a well received glass of wine. After freshening up in our basic accommodation we had some tea, followed by sticky toffee pudding!

After a rather poor night’s sleep we started off the last day with another hearty Full English breakfast to get us energised for the final (and highest) peak, Whernside.

A dull and chillier day we set off early, passing underneath the magnificent Ribblehead viaduct. We decided to do things contrastingly and complete the walk in the opposite way to what people normally do, passing through farms and having to wrestle through a pen full of sheep and lambs. We reached the base of Whernside at around 11 am and began the very steep ascent to the summit.

As we climbed higher and higher the winds began to pummel us and each arduous little peak we climbed to the top of revealed another, higher hill. After finally reaching the trig point and taking a rather windswept picture at the top, we found shelter from the wind and thoroughly enjoyed our lunch.

We set off back down, still battling against what felt like gale force winds and gradually made our way from the highest of the Three Peaks, relieved when the wind finally died down as we reached the bottom. Astonishing views of all three peaks and Ribblehead viaduct from this point took our breath away.

We followed the winding path for the final few miles until at last the viaduct, and the car, was once again in our sights, just in time to witness a train passing over. 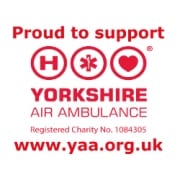